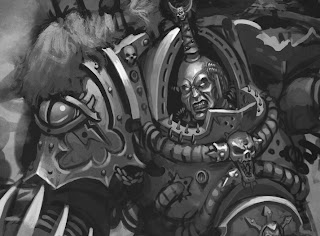 Commissions are open once more

I finished the big project I was working on for a client, and will show some of it as soon as I'm allowed. I also did a few for fun sketches and doodles during the time in my off hours.

Lastly, I'm going to a fantasy book convention this weekend, and figured I'd do a hypothetical young adult cover for it as I really didn't have something like that in my portfolio. It's still in the process of being made (I'll wrap it up tomorrow, I figure), but here it is so far:

A few quick sketches for my own amusement, in between work.

Shub-Niggurath, the black goat of the woods with a thousand young. 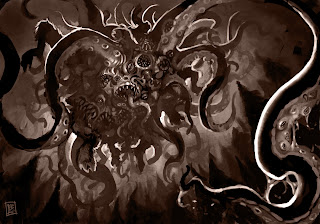 And I also played some mortal kombat recently, which got me pretty nostalgic, so I decided to do a quick kostume design of Sheeva (K intented): 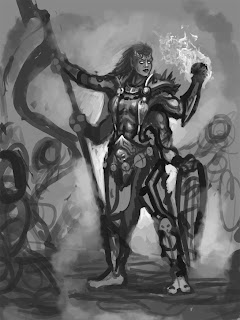 Took a bit of a day off today after returning from a trip to Sweden. Decided to set myself abit of a challenge and do a character design of the big bad of the Bible, Satan. As I poked around for ideas I thought it'd be fun to do a character design without clothing or armor as those are mortal things. This does mean that the finished design is kinda NSFW, but the emergency censorship rooster is here to save the day.

And here's a detail shot of the face: 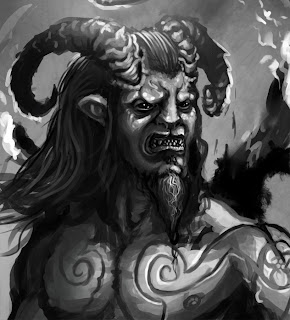 For those who want a peek at the uncensored version of the big D (the big devil. You guys, really) here is a link (NSFW. I am not responsible for any lost jobs or sanity):
https://dl.dropboxusercontent.com/u/16287008/Satan4.jpg

So, I did a few piece in my downtime, and finally got to work on Dispater. First the random doodles: 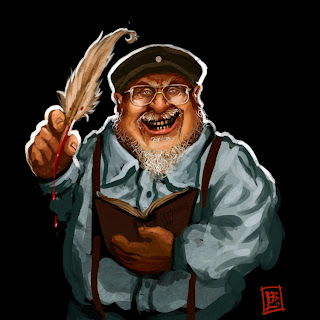 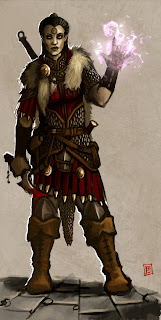 The first is "The Bloody George, slayer of characters" inspired by recent television events. The other is the result of me deciding that my portfolio needed a new "Character without a background" example.

He was kinda difficult to get a hold of, but I think I finally doodled a design for him that I like. We'll see :P I ended up giving him the Ragnar Lothbrok hairdo, because why the hell not :D

His description is as follows:
This dark-haired figure stands just over seven feet tall(2.1 meters). He could pass for human if it weren’t for the small horns protruding from his brow and his glowing red eyes. Dressed in regal finery, he carries a long rod capped with a macelike head.

The concept of the piece I'm doing is him using his touch of rust to off a paladin. 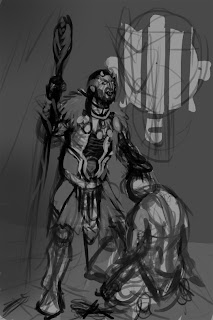 It'll still be a while before I'm not quite busy with commission work, at which point I imagine I can post more stuff here (most of what I do right now is for an RPG thing, and I rather think the client wouldn't want me to post it to the intermanets ;) )
Indsendt af Unknown kl. 16.01 Ingen kommentarer:

Bel is moving along nicely. I'm a bit busy these days because I got a fairly large commission, so my for fun projects will move along a good deal slower. I'm still debating if I think this one is finished or not, but I figure I'll put it away for a while, and then look at it again :) 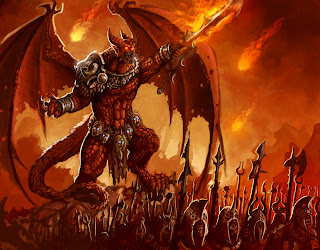 I've resumed an old project where I illustrate each of the nine Lords of Baator (Which is, of course, the property of the spooky wizard at the coast. I'm but a humble fanartist :) ). I'm doing each archdevil in numeric order, so I'm starting out with Bel. This painting is not quite finished yet, but here are a couple of in-progress shots. 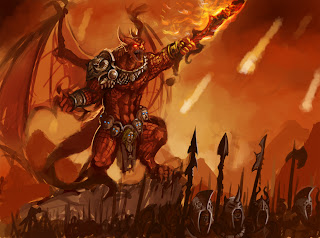 I can be contacted for commission work at: Artogrestudios@gmail.com